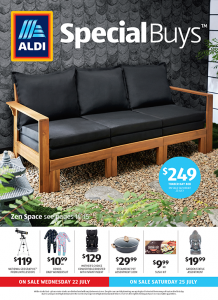 ALDI is a leading global discount supermarket chain with over 10,000 stores in 18 countries, but its origins date back to a small suburb of Essent, Germany in 1913, when the mother of Karl and Theo Albrecht opened the first small store. At the time, their father was a miner, but he later joined the family business as a baker’s assistant.

Karl Albrecht and his brother, Theo Albrecht were born in the early 1920s. When he was old enough, Theo completed an apprenticeship at his mother’s store, while Karl worked the deli counter. After serving in World War II, Karl returned home to reunite with Theo and take over their mother’s business. They concentrated on expansion and soon opened a second store nearby. By 1950, the Albrecht brothers owned 13 stores in the Ruhr Valley.

In the 1960s, the brother had it out over selling cigarettes. They could not find a resolution that would make them both happy. At the time, owned 300 shops and made nearly 900 million dollars a year. Although the brothers split, they kept their business savvy, and in 1962, they introduced the name ALDI—short for Albrecht-Diskont. The operation was split into two separate groups; one became ALDI Nord, headquartered in Essen; the other became  ALDI Süd, headquartered in Mülheim an der Ruhr.

Internationally, ALDI Nord operates in Denmark, France, the Benelux countries, the Iberian Peninsula, and Poland, while ALDI Süd operates in Ireland, United Kingdom, Hungary, Switzerland, Australia, Austria and Slovenia. ALDI Süd operated in the US and also owns the popular store by the name of Trader Joe’s.

The ALDI brothers were probably the first to feature what we now refer to as an “instant rebate” – in order to keep prices down, they would subtract the legal maximum rebate of 3%, instead of forcing the customer to collect and accumulate rebate coupons. They also learned that the best way to keep inventory costs down was to stock what flew off the shelves, so they began to remove poorly selling products to make way for bestsellers. They chose to not sell perishables such as fresh fruits and vegetables to keep their store losses down, although nowadays, they have an assortment of private labelled organic foods, bread, eggs and other perishables, all with a savings of 25-50% off the brand name competition. That’s a large chunk of change for working families to save.

ALDI also carries some seasonal types of products at deep discounts, such as outdoor supplies for the summer such as grills and swimming supplies. You can also find discounted household good, clothing essentials such as underwear, and health and beauty items at a fraction of the full price when shopping ALDI’s.

A 2008 study on grocery prices by the Australian Competition and Consumer Commission (ACCC) found that consumers pay less at Coles and Woolworths if there’s an ALDI store in the vicinity, now called “the ALDI effect“.

This means that if you don’t even bother to shop at ALDI, you will still reap the benefits of the competitive nature of the chain. According to the study, customers pay on average 5% less for comparable private label items if they shopped at a store within a kilometre of an ALDI location.

If you have more than one location of ALDI near you, you will probably save even more.

ALDI delivers cheaper prices by having a reduced product range, which means that not every store even carries the same inventory. Some savvy consumers will shop at two local locations to find the best deals on items they use regularly,  This means that many of customers will do two shops a week to make sure they get the best prices on all of their items. Often you can stock up on common household goods at deep discounts.

ALDI is well known for having excellent deals, most specifically on their own ALDI private-labelled products. If you’re looking for exceptional; deals, the best thing to do is to keep a grocery list and choose which items you want to buy at ALDI. Remember, ALDI doesn’t stock many fresh goods, so you’ll need to pick those up at Woolworths or another grocer.

Create a shopping list according to what products you want to buy at ALDI, and check the store’s catalogue for special sales on items you use regularly. Pay special mind to the price per unit calculations on foods to make sure you’re really saving money.  Families often find that they save a lot of money on everyday supplies and other staples that are labelled as ALSI brands. For example, if you decide to purchase ALDI Nappies instead of Huggies, you’ll usually save up to 50% on the total cost. This discount is typically throughout the ALDI branded store selections, so also try ALDI tuna, ALDI bread, milk, toothpaste and other staples for extra savings.

There is still a range of things that are not available at ALDI’s and will require trip to a separate grocery store, but ALDI’s sales really are the best when it comes to saving money.  Xmas supplies, holiday foods, and other products are also often on deep discount sale at ALDI. It’s important as a thrifty shopper that you remember that it’s not only regular purchases that can save you money when shopping at ALDI. You can save a lot of cash buying one-off goods at ALDI for parties and special occasions, especially if you are in the market for a party platter or other entertaining supplies.

Save Big On Daily and Weekly Special Buys at ALDI

ALDI does “Special Buys” several days of the week, and they are often listed on the website or in the catalogue savings circulars. Usually, these deals will be grouped as a special theme such as a “spring cleaning sale” or “great deals on pet supplies”. You can find out about all ALDI’s special product promotions by visiting the online catalogue regularly or signing up for the email newsletter and getting special promotions sent directly to your inbox.